The Management Committee is elected at the AGM.

An initial levy of $5-00 was to be paid by all clubs to join the District. The first President was June Howe of Gold Coast Burleigh Golf Club.  Helensvale affiliated in 1977 followed by Robina Woods, Carrara (now Emerald Lakes) and Twin Towns in 1989.

After lengthy negotiations with Gold Coast City Council by President Pam Ranger and Secretary Mary Jones a perpetual trophy was secured from the then Mayor of the Gold Coast, Sir Bruce Small. The term ‘Jubilee’ arose from the Silver Jubilee of Queen Elizabeth II in 1977 when the first event was won by Southport.

It was formed in 1977 and the first of its kind in Queensland. Pam Ranger and Mary Jones gained permission from the Qld Ladies Golf Union (QLGU) to form a Veteran Association and included all Qld and Gold Coast Clubs. It was not long before the Veterans association had over 1000 members and included members from Brisbane, Indooroopilly, Oxley, Redland Bay, Royal Qld, Wynnum, Nudgee and Pacific.  Veterans today have its membership only from Gold Coast affiliated clubs and has 1200 members.

This is the ultimate event in Inter-District competition and was played in 1983 in Rockhampton with Gold Coast the inaugural winners. The concept for an inter-district competition with teams of six players was conceived in 1981 when Meg Nunn was Country Vice-President of QLGU and Peg Torrens was Divisional representative.  Pam Ranger the Gold Coast President donated the Meg Nunn Salver. Today seven districts compete in this prestigious event, now a team of six with five to play.

With the establishment of the Meg Nunn event it became evident that a similar event for the Juniors was needed. In 1984 Pam Langford and Gail Corry negotiated with the QLGU to hold a match play handicap event initially with a maximum handicap 18 and up to 21 years of age. The maximum age is now 18. There have been a number of name players in the Junior Jug over the years such as Ann and Libby Wilson, Nicole Lowien, Melissa Daw, Lisa Gradwell, Allison Chell, Robyn Choi and Issy Taylor.

In 1984 Margaret Lawler then President of the Gold Coast saw a long cherished dream to play a match play home and away event to be held annually. A team of 7 players competed off the stick and it was played annually for 21 years until 2005. In this period Gold Coast won 14 times and Northern Rivers 7 times.

The current competition was established in 1988 with both Junior and Senior teams competing in match play. Prior to being a district event it was a divisional competition for seniors competing for a Divisional Salver that began in 1978. It later lapsed with divisions no longer in existence in Qld. The Junior competition began in 1983, as it was an opportunity for Juniors to compete in match play and has continued ever since with the Seniors joining in 1988. The juniors often form the nucleus of the Junior Jug team. Today it is a match play handicap event that is played over 2 rounds, one at home and one away.

WGGC District events & Open Days for member clubs are listed on this site.

If you/your club would like to include an Open Day or Visitors Day here, please email our web support web@wggc.com.au to upload a link to your event. 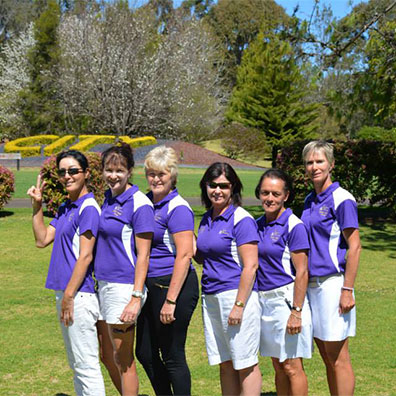